This morning we met with my doctor to discuss the results of my angiogram, his findings, his recommendations, and the next course of action.

There is a good video about administering the Surpass flow diverter on this page, although it doesn’t show it being deployed inside another diverter: Surpass Flow Diverter

I was surprised to read on my blog that I’ve been dealing with the stress of this darn remnant for 11 years now. When the re-coil and stent didn’t do the job, the next course of action would be the stent within a stent. If THIS doesn’t work, there is a possibility we could sacrifice that entire section of artery, but I’m counting on it working so let’s not even go there.

Making this decision with Dave by my side gave me a sense of relief. Relief in knowing I’m doing something about it and there is a plan of action. I have great faith in my doctor and his familiarity with my case, my brain, and this particular brain aneurysm for the past 11 years. I know he wouldn’t make a recommendation unless he felt there was a good chance of success. And so far, he hasn’t been wrong. 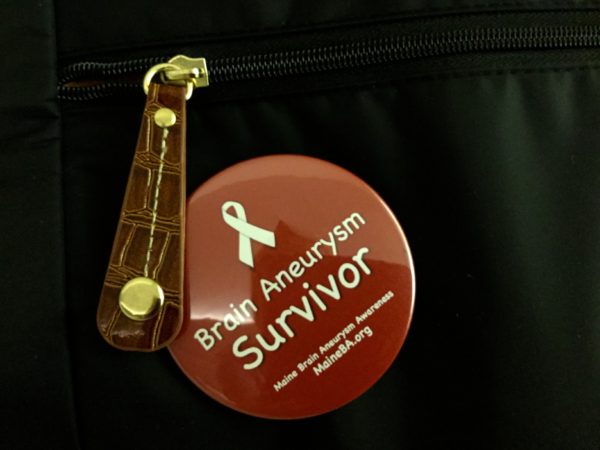 The follow-up with my interventional radiologist/neurosurgeon confirmed the MRA I had in December showed additional development of more blood getting into the neck of my first brain aneurysm – AGAIN. We went through these discussions back in 2015 when that remnant first showed up. I decided to kick the can and watch, wait, and continue to monitor it. After five years, it appears there is more blood now.

The doctor wants me to have another angiogram to get a closer look and determine if we need to take action now. This is not the way I had hoped to start the new year. It may be nothing alarming…or it might be.

I created the graphic below to present, in it’s simplest form, what’s happening. This is the first aneurysm that ruptured in 2006. It’s 11mm or about 1/2” in diameter.

During the last 15 years, I have had to endure a couple of “watch and wait” periods for both my aneurysms. There is always a nagging worry that lays there asking those probing questions: Is it growing? Has there been any change? Am I making it worse? Could something I’m doing make it rupture? Is that headache a sign that something is wrong?

Anyone who is living with brain aneurysms knows that worry. Telling me to “Not worry about it” is far easier said than done.

The good news is that I feel fine. I just hope I can stay that way. 🤞

15 years ago today my first brain aneurysm ruptured. The previous day, I had just finished the initial layout for the entire catalog. What a huge relief to finally know it would all fit after a stressful five months. I still had a great deal of work to do yet on the catalog, but my brain had other ideas on that chilly October morning.

I am still around today for several reasons:

Dave, my rock, my constant companion for over 20 years. I am so fortunate that I was discovered on AOL by this GOOD MAN in 1998. Not only am I amazed, blessed, and thankful by the care he provided ME while in the hospital and in recovery, but also by the time and attention he pays to other survivors we have met over the years. The world, and MY world, is a better place because of you, Dave. THANK YOU!

Although I started sharing my story on https://heidisbrainblog.com as a way to keep my family and friends updated on my recovery, it became a therapy of sorts to fight my way back, relearn the computer, hand-eye coordination, and connect with others going through the same thing.

It was wonderful to discover I was not alone and others were going through very similar struggles. I’m so thankful to the other survivors I have met over the years. Each of their stories have touched me and given me strength.

I am not a glorious survivor. I haven’t run marathons to prove my incredible physical strength, or started podcasts proclaiming a new-found energy and awareness for life. I haven’t shown the world my face on tons of YouTube videos (okay, I have a couple out there) or written a book, but I am surviving every day….and I think that’s pretty damn good.

15 years…and counting! Happy annie-versary to me.

I have been de-cluttering lately. Throwing out, or donating things that I haven’t used or looked at in years. If it doesn’t hold a strong, personal attachment, why keep it? The person who will have to clean up after I’m gone, won’t know if it was meaningful or not…or even care. If it’s taking up space and there is no sentimental value…get rid of it. Quite liberating.

Today’s wee task was a small basket filled with greeting cards. I remembered they were mostly “Get Well” cards from my craniotomy in 2014, but also forgot it was shortly after the loss of my other sister Rhonda. So, there was a mix of sympathy and get well soon cards. Odd.

Many were from co-workers, distant friends, and relatives who had heard about my surgery. Some were very poignant and meaningful and others were funny and distracting.

One such card was from my own mother. She always found THE best cards. Once card I received while recover in the hospital from my ruptured in 2006, was the perfect card for me. A painting of the sun sitting in a bath tub — one of my favorite pastimes. The writing on the outside simply said “The Sun’s Day off”. I have it framed in my office at home.

The card I stumbled across today from this surgery was so MOM. Funny, unexpected, and unique…just like she was. Even more shocking was the expletive inside. 🙂 But I LOVED it. It made me smile and laugh then, and it did so today when I reread it.

Little did I know that just 9 months later, I would also lose my mom. So, finding these cards is very, very bittersweet, but this one made me smile and laugh out loud! I “had fun” with this card, which is what she always used to tell us. God, I miss her.

Since that time in 2014, two of my co-workers have been lost due to cancer. Both were devastating blows and they were taken far too soon. Seeing their names and words was moving especially knowing how they would both struggled with their battles against the horrible diseases that overtook their bodies. I hope I was able to give them the same kind of support and comfort they gave me.

One such card was a beautifully penned, simple note from our photographer John. My sister Rhonda has just passed away and he had read about it on my brain blog. He comes from a large, loving family and his words about pain, loss and family meant the world to me then…and still do today.

I vividly remember that day like it was yesterday. I came to work and found a small orange envelope sitting on my desk. As I opened it and read John’s words about losing my sister, they hit my like a ton of bricks. After my eyes welled up with tears, I immediately walked over to his cubicle, thanked him for the card, and we hugged, held each other, and cried together.

John was also dealing with his own demons fighting cancer. Knowing how precious the time we have on this earth is, for him to take the time and acknowledge the pain I was going through while he was enduring his own fragility being the father of two young girls, meant even more. I miss him every day at work. He was a special, special human being.

All of these cards gave me strength when I needed it and gave me strength reading them again. Grief and healing went hand-in-hand during that period of my life. Neither were easy. I struggled with proceeding with the brain surgery such a short time (2 weeks) after losing my sister. I didn’t want to put my mother and my niece through anymore worry and pain. THEY were the ones who told me to go forward with the risky surgery. And it turned out it may have saved my life.

I thank those who sent cards. No one visited me at home or in the hospital, but the cards meant a lot and made me feel less alone in the world – even for a short time. THANK YOU!