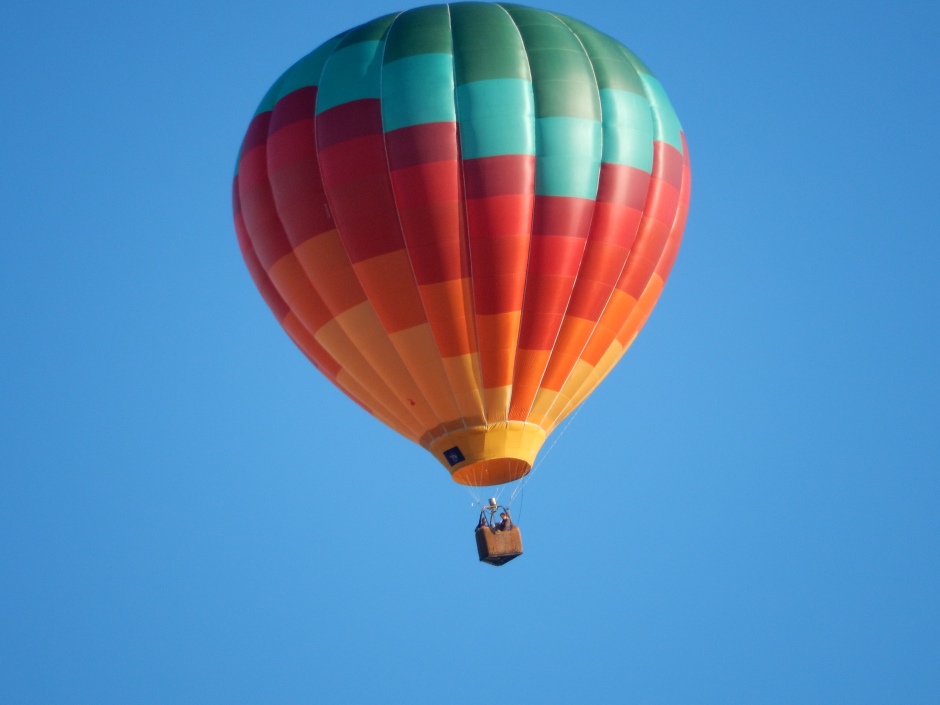 The 2015 KAT-Walk & Karo-5K for Brain Aneurysm Awareness was held this past Saturday and the weather Gods, or at least our angels we call Kim & Karolina, were on our side.

We arrived at the Back Cove to see the sun come up, and as we were unloading the trailer, I noticed a hot air balloon slowing rising above the horizon across the bay. I had to stop and take a photo as I didn’t know which direction it was going. Thankfully, it glided right over our location and provided a stunning view of the extremely colorful patterns. It was fitting the bright colors were in our array of colors; the teal blue for Kim, the red for Karo, the orange for Nolan and blue and white for Scotland! 🙂

We were extremely blessed by warm, but not hot temperatures, low humidity, no rain and light winds. Some years the high winds can cause major issues with the tents, printed collateral, and flags.

The event was physically moved down to a location along the trail that allowed us to see more of the people involved. The previous years we were set up in a row along the gravel trail. Last year, we had no idea there were over 600 people there until the 5k started and they all gathered in one place. Once they registered, they became all spread out until that point. This year, our hope was to provide an area where the teams, families, and friends could gather and continue to be a “part” of the day with everyone else. I think we succeeded in that respect and some very positive comments were shared.

I’m usually set up in the Brain Aneurysm Awareness tent and get to meet survivors & their supporters who are new to the event and welcome those who have returned. We also try to provide comfort and support for those who have lost a loved one. I know we celebrate those who survived, but we also try to remember the reason many of us are there is because we lost a loved one to this silent killer. We did have a tender moment of silence to reflect on those lost in the opening ceremonies and many people use the honor board to gather and take picture’s with their loved ones sneaker.

Another good thing about moving the venue location was having the Start/Finish line directly in the vicinity of our tents. Those who finished early, could continue to be apart of the event and still cheer on those who crossed the line because it was right there.

Because Dave is so familiar with so many of the families and participants through his direct personal contact with them, he knows so many of the runners, walkers and their supporters. So, as he started to see some of them come across the finish line, he grabbed the microphone and started announcing them. I think that added a real special, personal touch. I know it was nice to have my name mentioned as I crossed the line all by myself again. Heidi McCausland….team of one!

Usually the most heartwarming and heart-wrenching parts of the day are when we meet random people who are coming to the event for the first time and are reluctantly coming to the tent to read more about brain aneurysms and who want to write their loved one’s name on a sneaker to add to our Honor Board. I met one women who was there to walk for her best friend whom was lost 6 years ago. This was her first time there and it was very emotional for her. I hope participating in the event and honoring her friend in such a way helped comfort her.

I also met another woman who had lost her sister two years ago and was just walking by and saw the signs for the event. She didn’t participate in the event, but came to our tent, signed in, made a sneaker out for her sister, and took a brain aneurysm awareness bracelet. No matter how we reach out and connect, it’s all important.

Last year’s event, which raised a record amount of money, helped fund a $25,000 Chair of Research through the Brain Aneurysm Foundation. The recipient of that award made the trip to our event to honor US and to participate. Not only did Dr. Kimberly P. Kicielinski make the trip from Alabama, via Houston, then Boston, but she participated in the 5K, received honors from our committee, made a speech, and then she and her boyfriend Justin helped tear down the event afterwards and joined us for an after-event party.

The work Dr. Kim is doing is very important. She is trying to determine the thickness and fragility of artery and aneurysm walls. Exploring this issue could result in saving many lives. If doctors are aware an aneurysm is at higher risk of rupturing due to a weakness in the wall structure, they could act and operate and save a life before a potential catastrophic rupture occurs. Dave had some wonderful communications with Dr. Kim via email prior to meeting her in person at the event and things she said and obviously has done and is doing, really struck a chord with our entire committee.

For me personally, after my 2nd unruptured brain aneurysm was clipped in January, 2014, the doctor said we dodged a bullet because the aneurysm itself was very oddly shaped and had a weak point at the top of it: something they weren’t able to determine UNTIL they opened up the skull and had physical contact with the aneurysm. Dr. Kim’s work could provide that information before they go into the skull. If I hadn’t made the preventative decision to have that surgery, it could have killed me…and sooner, rather than later.

I left the shade of my tent to participate in the 2-mile walk this year. I walked alone again. Many people pass me, some are way behind me, but I finished and was proud. I walked for myself, my sister Dori, Dave’s niece Kim, for my fellow survivors who couldn’t join us this year, Lori & Julie, and for all those who don’t have the support of co-workers, friends, or even family members.

The trail is a beautiful spot for a walk/run and Dave is always insistent that there be high tide during the event to provide the best possible view. Trust us…you don’t want to be walking there when it’s low tide. LOL Just not pleasant. The flags were waiving, the surf was light and the seagulls were chattering away.

Two special guests were Christine Doherty Kondra and Alison Sedney from The Bee Foundation, a national organization focused on research for brain aneurysms. It was wonderful they made the trip up from Philadelphia to join us and speaking to them reminded me of how important the national dialogue on brain aneurysm awareness is. So many people don’t know what a brain aneurysm is until they, or someone they love, is affected by it. Alison lost her daughter, Christine’s cousin, on Christmas day to a ruptured brain aneurysm and just like all of us who participate in the event on Saturday, she too, has decided to DO something. The efforts of The Bee Foundation not only raise awareness, but provide critical medical research. It was great meeting them.

Every year we try and try to get some local television coverage of our event. Local news can cover a story such as the new Passy Pete, the lobster that can predict six more weeks of summer, but we’re unable to get them to cover our event? I just don’t get it and it’s very, very disappointing and depressing.

However, this year committee member, and co-founder of the KAT-Walk, Art Piteau, did a wonderful radio interview that aired the morning of the walk on the Derek Volk Radio Show on WLOB radio 1310. We will definitely use this resource in the future and Art did a great job on a subject he’s very passionate about because he adored Kim and was a large part of her life. HEAR AUDIO INTERVIEW>

We were also blessed to have a wonderful article written by Harrison Thorp for The Lebanon Voice newspaper. He was at the event with his partner Martha who was a very recent brain aneurysm survivor having had a craniotomy and clipping just a few short months ago. They both participated in the walk and gave a heart-felt report on the day’s events including the story of one survivor, Deb Hanmer, who is source of inspiration for many of us. It was wonderful to get a new participant’s perspective. READ ARTICLE>

Overall the event was successful in my eyes. We had a tremendous group of volunteers this year which made set up and tear down so much easier and even, dare I say, enjoyable! Thank you to everyone whose tireless efforts provide a beautiful, personal, and productive event. BRAVO!

4 thoughts on “Balloons, Brains, and Bravery”