On this past Labor Day holiday weekend, Dave and I attended the Nolan’s H.E.R.O. Foundation 1st Annual 5K Run & 3.13K Walk in Pittsfield, Maine. About a 40 mile drive north from where we live. We brought a Brain Aneurysm Awareness tent and information regarding brain aneurysms.

Nolan’s H.E.R.O. Foundation is a non-profit organization formed to carry on the mission of Nolan Berthelette. who lost his life to a ruptured brain aneurysm just a little over a year ago in 2014. At the very young age of 14, Nolan’s death struck a chord in this tight-knit community and the outpouring of support his family has received is overwhelming and inspiring.

Last year, just a short time after we heard of Nolan’s death, our group contacted the family to see if there was anything they needed or if we could lend support and comfort. We were surprised when a group of over 160 people arrived at our KAT-Walk & Karo-5K just a few short months after losing their son, brother, friend and team mate to this silent killer. Emotions were still very raw and many had a difficult time, but we had hoped the support and comfort they felt from the local brain aneurysm community would help in some small way on their paths to healing.

When Nolan’s parents set up their H.E.R.O. Foundation and pursued holding an event in Pittsfield, we knew we had to have a presence in some form and show OUR support in return for their event. Sadly, it was just Dave and I from the group in the southern part of the state, but it was an honor to be there and help in any way we could. We provided almost off their tents and their fantastic crew of volunteers made setup and tear down an easy experience.

Ray, Amy and Nason are still grieving the loss of Nolan, but setting up the foundation and creating, what they hope to be an annual event, allows then to be able to DO something, where they weren’t able to save Nolan. I know that’s something that everyone struggles with after losing someone: if they only could have DONE something to save them or help. That helplessness and lack of control can linger for years.

As we arrived in Pittsfield at the Maine Central Institute’s football field, the town was still waking up on a brilliant morning filled with blue skies, light fog, and the hangover of Nolan’s former football team kicking butt & taking names the previous night on that very field with a 64-0 win! How appropriate.

The number of volunteers and donated items was remarkable. Truly a community effort. So many parents knew Nolan because of his friendship with their children and they know and love Ray & Amy and wanted to show their support in any way they could. Cheerleaders from the school were there to cheer on participants, the entire football team, tired from the previous night, showed an amazing amount of energy and support and helped in any way they could.

Since we were in a tent representing what killed Nolan, we weren’t sure how many people would stop to talk with us, but it was a nice mix of curious adults and teens and those who knew someone else who had a brain aneurysm as well and I think they all appreciated us being there, even if it was a painful reminder. 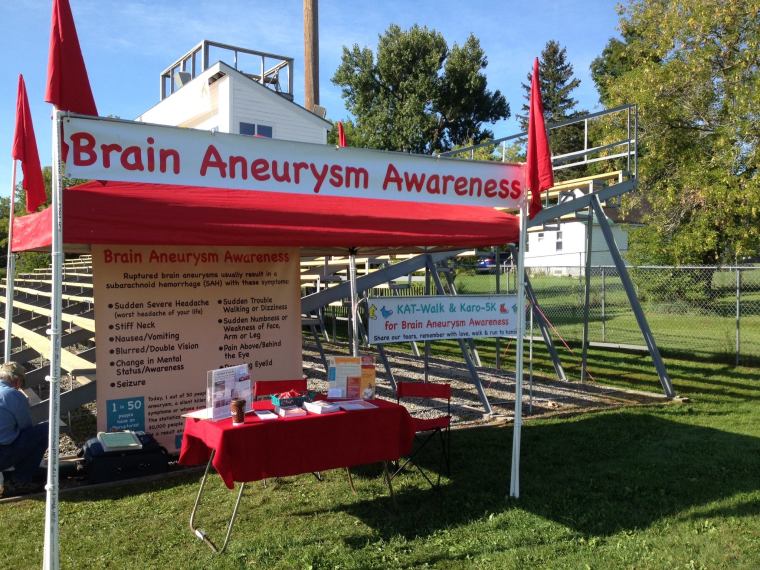 The most poignant moment for me was when a group of young ladies from Nolan’s school came to the table. I think they were mostly there for the free brain aneurysm awareness bracelets, but they did ask a few questions and seemed genuinely, albeit hesitantly, interested in exactly what had happened to Nolan. Dave tried to be very sympathetic and careful in explaining what an aneurysm was and how it effects the brain when it ruptures. At one point I saw one of the girls place her arm around another lovely young ladies’ waist for comfort. It’s those simple gestures of compassion that can mean the most to someone who has lost a loved one to brain aneurysms. I know…I’ve been there.

I think the family, Nolan’s classmates, and the community are moving in a good direction by honoring Nolan in such a positive way. I never knew Nolan, but the stories I hear about him indicate he was a very special young man and had an amazing life ahead of him. The number of orange items, Nolan’s favorite color, was evident throughout the event in his honor.

H.E.R.O. stands for Helping Everyone Realize Opportunities. “Being a hero doesn’t take someone that is superior to others or with an abnormal power. All it takes is an average human willing to do what is right for others.” Those are words written by Nolan in his last essay and they have inspired Ray and Amy to create the foundation.

If you know someone who is “willing to do what is right for others”, let the world know and nominate them for a “I Am A H.E.R.O” bracelet on the Nolan’s H.E.R.O. Foundation website.

I think everyone knows an unsung hero in their life. Why not recognize them in a special way and let the world know they are a true H.E.R.O.