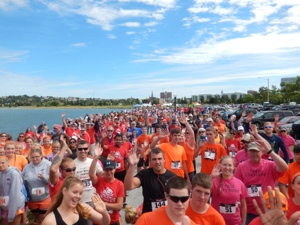 It was chilly for September, even for Maine, and the winds weren’t exactly relaxing but the annual KAT-Walk & Karo-5K held last Saturday was a terrific success! At one point I said the words “My heart is full” to myself after looking out at the many, many people filtering in throughout the brisk morning.

Over 600 people attended the walk and run this year. We’ve never had that many. Granted there was a busload of school kids and we certainly can’t expect, or rely, on those exact people to attend the following years, but it was great to have that kind of show of support.

To me it never really is about the money raised, but the physical show of support seen on the day of the event. You can’t get that warm fuzzy feeling from a check. You can’t share a hug with a credit card charge. And you can’t feel the sense of accomplishment after finishing the run or walk from a $10 dollar bill.

That being said, we DID raise over $30,000 this year! We are also very proud that the “Maine’s KAT-Walk & Karo-5K Chair of Research” was one of eleven research grants totaling $230,000 awarded at The 8th Annual Brain Aneurysm Foundation Research Grant Awards Symposium. The event was held on Thursday, September 11, 2014, in Miami, Florida.

Our 2014 Chair of Research was awarded to Koji Hosaka, PhD, Dept. Neurosurgery, University of Florida. He is working on identifying proteins that can be coated to the miniature coils used in the repair of Brain Aneurysms. It is anticipated that these compounds will be effective to promote healing and shorten recovery times and complications.

Now, back to those warm, fuzzy feelings. Every year, I’m always struck by the people who show up to support someone who has lost someone or to support another survivor. In fact, at our monthly support group, instead of saying “caregiver”, we voluntarily started calling them “supporters”, which I like much better. There are also many people who attend from out of state.

Two such supporters and fellow brain aneurysm survivors, I had met previously and was honored they came to our event. One was from Florida, via Pennsylvania and the other from New Hampshire.

It was nice to actually walk with someone this time! Lori is a walking miracle surviving multiple brain surgeries & a stroke. With the help of her service dog Tober and her husband Ralph, we were a great walking team and they kept me on stride for probably my best time ever. Yes, I was sore and tired afterwards, but I needed to keep up.

Julie has come to our walk in the past and was a huge help at the brain aneurysm awareness tent getting names and greeting other survivors. Julie has had several struggles with other medical issues including breast cancer and she remains an upbeat proponent of being your own advocate for better medical care. We had the same doctor coil our ruptured brain aneurysm in 2006 about 3 or 4 months apart in Portland, ME.

The three amigos had a grand time afterwards giggling like little girls and celebrated the day with a drink. I enjoyed their company tremendously and was thrilled they joined us and me. Again…it’s that show of support that can mean so much to so many.

The endless hours of hard work put in by so many volunteers is all worth it when we see the outpouring of support to raise awareness for brain aneurysms.. My husband, Dave, had a “To-Do” check list that had over 800 items to be completed. I know his niece Kim would be so proud of the work he is doing and would be embarrassed that an event was named after her. I also KNOW she’d flash that fabulous smile seeing the efforts put forth, and know she’s right there beside us the entire way trying to raise awareness about the silent killer that took her from us.

I believe this event would not be as organized, or look as good (flags, tents, signs, etc) without Dave putting in endless hours of contacting survivors, supporters, and sponsors. I hope people who attend realize the personal contact Dave, and other volunteers, have made to make those who attend the event feel welcomed and comforted. I seriously doubt other walks/runs have that kind of personal communication from an organizer. Not only is Dave MY biggest supporter, but he’s trying to support everyone else touched by brain aneurysms. He knows…he’s been effected in multiple ways by them and I love him for his passion and endless drive to make sure the events go off without a hitch (even checking the tides!) and it looks amazing. We actually don’t see much of each other during the event. He and I have to catch up on the day on the long drive home afterwards with the trailer loaded up with the “circus”.

I also realize the event was overwhelming for me this year. I was extremely tired after the walk. I AM just 8 months out from open brain surgery, and there was a LOT of mental and visual stimulation all day. Speaking to many people, walking, taking pictures, unpacking boxes, re-packing boxes, not much food, and being overly tired from work. It’s a shame no one FROM work was there to see the event we have worked so hard to produce and give me some support. But, I’m blessed to be included with the over 20 survivors who attended the event with THEIR supporters. I had my sister Dori and Kim on my mind and walking for them and myself was a privilege. Good for me! 🙂 It was nice to cross the finish line with someone who knew I had actually crossed the finish line and we gave each other a high five and a hug.